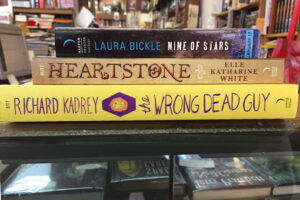 One of the things I loved about my job at The Stars Our Destination (1988 to 2004 for those who haven’t heard me ramble about that place before) were the visits from publisher’s sales reps and the occasional package of Advance Reader copies.

I really appreciated knowing more about upcoming titles before I had to commit to an order, and the greater span of time it gave me to inform and excite my regular customers.

Here at DreamHaven Books I haven’t been as energetic about establishing ties with the publishers, or letting them know how useful advance information can be. So as part of my just-evolving series of blog posts here on the website, I’ve decided to start off with a description of the recent arrivals from the Harper/Voyager publication team.

They have (as you can see in the photo) provided uncorrected proof copies of three upcoming titles:

Nine of Stars by Laura Bickle is the first novel in the Wildlands series.

“As the daughter of an alchemist, Petra Dee has faced all manner of occult horrors – especially since her arrival in the small town of Temperance, Wyoming. But she can’t explain the creature now stalking the backcountry of Yellowstone, butchering wolves and leaving only their skins behind in the snow. Rumors surface of the return of Skinflint Jack, a nineteenth-century wraith that kills in fulfillment of an ancient bargain.

The new sherrif in town, Owen Rutherford, isn’t helping matters. He’s a dangerously haunted man on the trail of both an unsolved case and a fresh kill – a bizarre murder leading him right to Petra’s partner, Gabriel. And while Gabe once had little to fear from the mortal world, he’s all too human now. This time, when violence hits close to home, there are no magical solutions.

It’s up to Petra and her coyote sidekick Sig to get ahead of both Owen and the unnatural being hunting them all – before the trail turns deathly cold.”

Heartstone by Elle Katharine White is a debut historical fantasy.

“Recasts Jane Austen’s Pride & Prejudice in an imaginative world of wyverns, dragons, and the warriors who fight alongside them against the monsters that threaten the kingdom: gryphons, direwolves, lamias, banshees, and lindworms.

They say a Rider in possession of a good blade must be in want of a monster to slay – and Merybourne Manor has plenty of monsters.

Passionate, headstrong Aliza Bentaine knows this all too well, she’s already lost one sister to the invading gryphons. So when Lord Merybourne hires a band of Riders to hunt down the horde, Aliza is relieved her home will soon be safe again.

Her relief is short-lived. With the arrival of the haughty and handsome dragonrider, Alastair Daired, Aliza expects a battle; what she doesn’t expect is a romantic clash of wills, pitting words and wit against the pride of an ancient house. Nor does she anticipate the mystery that follows them from Merybourne Manor, its roots running deep as the foundations of the kingdom itself, where something old and dreadful slumbers … something far more sinister than gryphons.

It’s a war Aliza is ill-prepared to wage, on a battlefield she’s never known before: one spanning kingdoms, class lines, and the curious nature of her own heart.

Elle Katherine White infuses elements of Austen’s beloved novel with her own brand of magic, crafting a modern epic fantasy that conjures a familiar yet wonderously unique new world.”

The Wrong Dead Guy by Richard Kadrey, sequel to The Everything Box.

“The second entry in Richard Kadrey’s comedic supernatural series – chaos ensues when Coop and the team at DOPS steal a not-quite-dead and very lovesick Egyptian mummy wielding some terrifying magic.

Coop, a master thief sort of gone legit, saved the world from an ancient doomsday device – heroism that earned him a gig working for the Department of Peculiar Science, a fearsome top secret government agency that polices the odd and the strange. Now Woolrich, Coop’s boss at the DOPS, has Coop breaking into a traveling antiquities show to steal a sarcophagus containing the mummy of a powerful Egyptian wizard named Harkhuf. With the help of his pals Morty, Giselle, and a professor that’s half-cat, half-robotic octopus, Coop pulls off the heist without a hitch.

It’s not Coop’s fault that when DOPS opened the sarcophagus they didn’t find the mummy they were expecting. Well, it was the right mummy, but it wasn’t exactly dead – and now it’s escaped, using a type of magic the organization hasn’t encountered before. Being a boss, Woolrich blames his underling for the screwup and wants Coop to find the missing Harkhuf and make it right, pronto.

Digging into Harkhuf’s history, Coop thinks the mummy is hunting for an ancient magical manuscript that will help him bring his old lover back to life. Which wouldn’t be so bad if she wasn’t a warrior sorceress hell-bent on conquering the world with her undead armies.

Coop would very much like to run from the oncoming chaos. It’s one thing to steal a mummy, but another to have to deal with headhunting bureaucrats, down-on-their-luck fortune-tellers, undead mailroom clerks, and a rather unimpressed elephant. Unfortunately, there’s nowhere to run. If he wants the madness to stop, he’s going to have to suck it up and play hero one more time. But if Coop manages to save the world AGAIN, he’s definitely going to want a lot of answers. And a raise.”

Their info sheet also came with a list of other Harper/Voyager titles this season:

Of the Abyss by Amelia Atwater-Rhodes: A disparate group’s risky journey to find magical solutions in the accursed Abyss realm. Nov 1st, mmpb, $6.99

How to Save the World by Lexie Dunne: Third book in the humorous Superheroes Anonymous series, Gail returns to save the world as Hostage Girl. Nov 1st, mmpb, $6.99