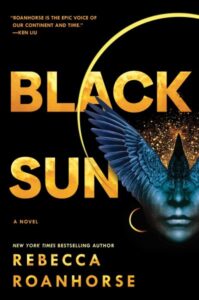 This book is the first volume in a trilogy called Between Earth and Sky. It is celebrated (on the cover copy) as “the most original series debut of the decade” and praised for finding its inspiration in the “civilization of the pre-Columbian Americas.” Having read quite a bit of fantasy over the decades, I didn’t see a huge difference in cultural viewpoints or magical abilities. But the book is beautifully written and engrossing. Its strongest point is its magnificent and wrenching characters.

Xiala is a foul-mouthed, fierce pirate ship captain, an outcast from her own people. It becomes clear eventually that her people, the Teek, are a society of women only, living in precarious harmony with the Goddess of the sea. There is a Teek saying: “Impress a man today, and he’ll expect you to impress him tomorrow too” (p. 175). And another: “The sea has no mercy, even for a Teek” (p. 227). She already knows this.

Xiala is forced to sail a mysterious young man named Serapio to a place called Tova in time for the celebration of an astrological Convergence. Serapio’s story unfolds also, a long history of abusive training initiated by his own mother, in hopes of fulfilling an almost forgotten prophecy. He belongs to the repressed Crow People, whose lamentations say, “We have become a place of long weeping, a house of scattered feathers” (p. 291). He has never met another Crow person except his mother.

In Tova, the Convergence is awaited by Naranpa, a naive woman from the slums of The Coyote’s Maw who has unexpectedly and unpopularly risen to the position of Sun Priest. Though this is a position of highest power, in actuality she has been unable to enact the reforms she sees as necessary. She is possibly the only priest who believes the Manual which states, that the priesthood is “a body of Reason and Science beyond the petty squabbles of humankind” (p. 385). She will learn otherwise.

There are others: The crew of Xiala’s boat, Narampa’s slum-lord brother Denaochi, a crow warrior named Okoa and his giant riding-crow Benunda, and the mysterious witch Zataya. All of them will be both destroyed and saved by the coming Convergence. But the outcome is truly in the hands of the Gods, and there’s no telling which, if any, side They might be on. This is not a safe or predictable world, though it is filled with wonder and aching sorrow. I would pick up Book Two at once but, sadly, its release date has not yet been announced. I’ll have to be content to wait.