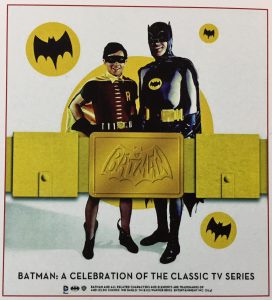 Bob Garcia and Joe Desris, authors of the new coffee-table book from Titan Books, Batman : A Celebration of The Classic TV Series, will be at DreamHaven Books (2301 E. 38th St. in Minneapolis) on Saturday, December 10th at 2:00pm. They will talk about and sign this detailed look at the still-popular television series which aired 50 years ago.

Please join us for what’s sure to be a fun afternoon!

Batman: A Celebration of the Classic TV Series is the definitive book for all fans of the popular Sixties show. Presented in a lavish hardcover edition, the book features classic images, rare stills, photography and production art and serves as the ultimate tribute for fans of the series.
Now at long last, collectors and Bat-fans alike can indulge in a detailed and in-depth look at the show that inspired generations.

KA-POW! This is the book Batman Fans have been waiting for! For the first time, the classic 1960s TV series, starring Adam West and Burt Ward as Batman and Robin, gets the lavish, in-depth coffee table book tribute it so richly deserves. From the Rogues Gallery of Villains, including the Penguin, the Joker and Catwoman, to the car every kid wanted – the Batmobile – it’s all here! Holy History Batman!

The book will provide an in-depth and highly visual overview of the show, and the cultural impact it had, defining the Dynamic Duo for a generation, and bringing Pop Art to Primetime.

From the creation of the show, through the production of its 120 episodes over 3 seasons, to its legacy and afterlife in continual syndication around the world, the book will relive favorite moments, uncover behind the scenes secrets, and celebrate the people both in front of and behind the camera who brought Batman to the screen.

Filled with classic images, and rare and previously unseen photos and production art from archives and the private collections of Adam West, among many others, this will be the definitive companion to the series, both for long-standing fans, and newcomers discovering the show’s charms for the first time.

BATMAN and all related characters and elements are trademarks of and (c) DC Comics.