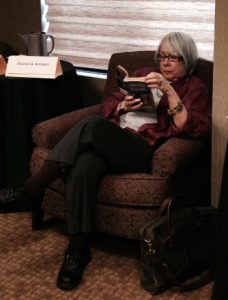 On Wednesday, May 25, ELEANOR ARNASON reads from her work at 6:30 p.m. Ms. Arnason was born in Manhattan and grew up in New York, Chicago, London, Paris, Washington DC, Honolulu, Saint Paul, and Minneapolis. She received a BA in art history from Swarthmore College and did graduate work at the University of Minnesota, before quitting to learn about life outside art museums and institutions of higher learning. She made her first professional sale in 1972 while living in the Detroit inner city. Since then she has published five novels and over 30 novellas, novelettes, short stories, and experimental short forms. Her fourth novel, A Woman of the Iron People (1991), won the James Tiptree Jr Award for gender-bending science fiction and the Mythopoeic Society Award for adult fantasy. Her fifth novel, Ring of Swords (1995), won a Minnesota Book Award. Since 1994 she has devoted herself to short fiction. Her story “Dapple” won the Spectrum Award for GLBT science fiction and was a finalist for the Sturgeon Award. Other stories have been finalists for the World Fantasy, Hugo, and Nebula Awards. She lives in Minnesota, where for several years she made her living as the financial manager for a small arts nonprofit. Aside from accounting and science fiction, her interests include politics, economics, bird-watching, driving down two-lane country highways, and exploring the remains of the Great Lakes industrial belt.

Speculations is a co-production of DreamHaven Books and SF MINNESOTA, a multicultural speculative fiction organization that also hosts a midsummer SF convention, DIVERSICON, the 24th edition of which will be held July 29-31, 2016, at the Best Western Plus—Bandana Square, Saint Paul, with Guest of Honor JESSICA AMANDA SALMONSON and Special Guest NAOMI KRITZER.