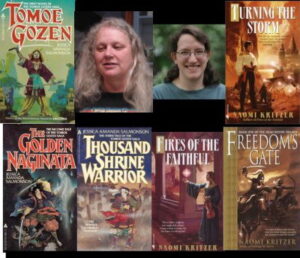 Please join us Thursday, July 28th for a reading with the Guest of Honor and Special Guest of Diversicon!

Jessica Amanda Salmonson is a recipient of the Lambda Award, World Fantasy Award, and ReaderCon Certificate. She is a novelist: Anthony Shriek, The Golden Naginata, The Swordswoman, Tomoe Gozen, etc.; short story writer: The Deep Museum, A Silver Thread of Madness, The Complete Weird Epistles of Penelope Pettiweather, Ghost Hunter; and poet: The Death Sonnets, The Ghost Garden. She has edited a number of horrror and/or fantasy anthologies (Heroic Visions, Tales by Moonlight), and single-author weird fiction collections such as of Marjorie Bowen, Julian Hawthorne, Sarah Orne Jewett, Vincent O’Sullivan, Mary Heaton Vorse, Fitz-James O’Brien, Harriet Prescott Spofford, and others. She lives with her spouse, artist and potter Rhonda Boothe, and their dogs, on a hillside in a Pacific Northwest military town overlooking Puget Sound from her crumbling spooky looking Edwardian manse.

Naomi Kritzer’s short stories have appeared in Asimov’s SF, The Magazine of Fantasy and Science Fiction, Realms of Fantaasy, Strange Horizons, and Tales of the Unanticipated, Her novels Fires of the Faithful, Turning the Storm, Freedom’s Gate, Freedom’s Apprentice and Freedom’s Sisters are available from Bantam. Since her last novel came out, she has written an urban fantasy novel about a Minneapolis woman who unexpectedly inherits the Ark of the Covenant; a children’s science fictional shipwreck novel; a children’s portal fantasy; and a YA novel set on a dystopic seastead. She has two e-book short story collections out: Gift of the Winter King and Other Stories, and Comrade Grandmother and Other Stories. Naomi lives in St. Paul with her husband and two daughters.

Speculations is a co-production of DreamHaven Books and SF MINNESOTA, a multicultural speculative fiction organization that also hosts a midsummer SF convention, DIVERSICON, the 24th edition of which will be held July 29-31, 2016, in the Twin Cities, with Guest of Honor JESSICA AMANDA SALMONSON and Special Guest NAOMI.KRITZER.