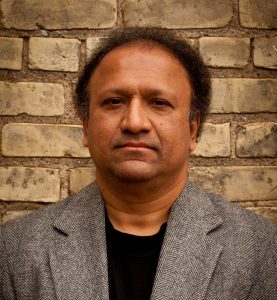 DreamHaven Books, in association with the dark fantasy convention, Arcana, is proud to present S.T. Joshi in a talk about his work and interest in “The Dark Fantastic”.

S. T. Joshi is an author, editor and one of the foremost authorities on H.P. Lovecraft and other authors of Weird Fiction.  From Mr. Joshi’s website  – “S. T. Joshi (b. 1958) is a leading authority on H. P. Lovecraft, Ambrose Bierce, H. L. Mencken, and other writers, mostly in the realms of supernatural and fantasy fiction. He has edited corrected editions of the works of Lovecraft, several annotated editions of Bierce and Mencken, and has written such critical studies as The Weird Tale (1990) and The Modern Weird Tale (2001). His award-winning biography, H. P. Lovecraft: A Life (1996), has already become a collector’s item. An expanded and updated version, I Am Providence: The Life and Times of H. P. Lovecraft, was published in 2 volumes in 2010. But critical, biographical, and editorial work on weird fiction is only one aspect of Joshi’s multifaceted output. A prominent atheist, Joshi has published the anthology Atheism: A Reader (2000) and the anti-religious polemic, God’s Defenders: What They Believe and Why They Are Wrong (2003). He has also compiled an important anthology on race relations, Documents of American Prejudice (1999).