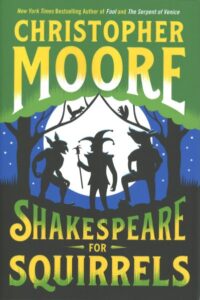 Hi folks! Lisa Freitag has been kind enough to do some book reviews for us and if you’re curious about Christopher Moore’s latest, here is what she had to say about it.

Shakespeare for Squirrels by Christopher Moore

When my kid was in middle school, I caught him watching a video stream of a random comedian whose act seemed to consist only of endless repetition of the f-word. I figured my son already knew that word, and decided to criticize the comedian, not for his language, but for his total lack of creativity in using it. This is probably not the only reason my son later fell in love with Shakespeare and his brilliant language. Like Shakespeare, Christopher Moore is not lacking in creative abilities. Shakespeare for Squirrels is packed with inventive language, mostly in the form of sexual innuendos and verbal obscenities, each funnier than the last.

The story is a very loose—or perhaps totally inaccurate–retelling of A Midsummer Night’s Dream. The substitution of Moore’s first-person narrator, Pocket of Dog Snogging, for Puck–because the story doesn’t need two fools–is only one of the ways in which the story goes wrong. There are also Amazons under the command of Hippolyta, a fifth fairy named Fluffer-Nutter, goblins loyal to Oberon, and a cast of rude mechanicals ready for a class war with Duke Theseus of Athens. Not to mention the squirrels.

Pocket has also starred in two previous novels, Fool (apparently a send-up of King Lear) and The Serpent of Venice (draw your own conclusions). Like most good fools, he can get away with nearly any criticism, as long as he hides it with clever, obscene jokes. He is obnoxious, cocky, and keenly observant, as he makes his way through the “very mythical fourteenth-century forests” outside of Athens. (What? No olive trees?) He is hilariously inventive in his profanity, farming every lewd suggestion that can be made within Shakespeare’s tale. “Fuckstockings!” These shadows have indeed offended! Delightfully so.