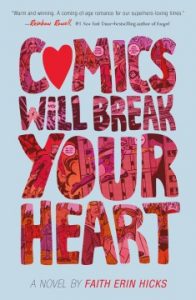 Faith Erin Hicks is best known for her many popular graphic novels, including The Adventures of Superhero Girl, which won an Eisner Award. She is well-prepared to write her first young adult (prose) novel, particularly one which circles around comics and the people who love, draw, and write them. There are no superheroes in Comics Will Break Your Heart, but the characters’ lives are imbued with the wonder and disappointments of producing comics.

The novel is an unabashed romance between Weldon, the grandson of the writer of a wildly lucrative superhero franchise called TomorrowMen, and Mir (short for Miriam) the granddaughter of the artist for the series. Weldon’s family is super-rich, but Mir’s grandfather gave up his share in the TomorrowMen and failed in a long and unpleasant court case to re-claim it. Unsurprisingly, the rich family is unhappy and broken, and Mir’s family is poor but loving and supportive. Ordinarily I dislike this sort of stereotyping, but I found the book funny and very well-written. I actually read it in one short couldn’t-put-it-down afternoon.

I put the book in the vague category I call “nerd romance,” where the protagonists are geeky teenagers who don’t quite fit in at school and who are more interested in going to college than getting married. But Comics Will Break Your Heart is not quite a typical nerd romance. Weldon and Mir are both really rather non-nerdy. Sure, they get good grades and read comic books, but they are both socially competent, comfortable with their appearance, and relatively untroubled by weirdness. I liked them anyway.

They also have very interesting families, and I found the adults in the story just as compelling as the two teenagers. Teen novels usually provide only a glimpse of the lives of the supporting adults, but several adult characters in this book are still dealing with their own issues from the troubled history of the TomorrowMen franchise. The two kids are not the only people in the story who must deal with past events and learn to live with both the glory and perils of creating a popular work of art.