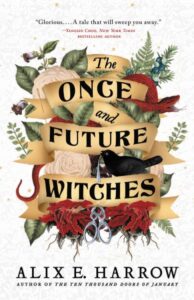 In modern fantasy tales, the magical power of women is sometimes seen as a secret and complicated thing, imbued with the mysteries of childbirth and caregiving. This is not necessarily a benign power, since in this sort of fantasy, preventing or ending pregnancy is often one of its roles. As such, it is easily dismissed and misunderstood by those men (and sometimes women) who are more impressed with offensive power and control.

The Once and Future Witches uses storybook witchcraft, both benign and dark, as an extended metaphor for the ways in which women’s voices and power have been suppressed. It assumes that magical power is very real but has been labelled as evil and forced underground by the men with power. The novel takes place in an alternate, Dickensian, early-industrial America, where the power of men is largely political. Both burning witches and preventing women from voting are being used to keep women under control.

I found the story to be a bit heavy-handed, with too many graphic depictions of the subjugation of women by fathers, husbands, factory owners, and politicians. But the addition of a loving lesbian relationship alongside a developing heterosexual relationship gives the old tales new meaning. And the group of women fighting for their rights to both magic and politics also discover new sources of spells and support from women of color and tales of magic from diverse cultures.

The story is a gorgeously-written remix of the magic we have seen many times. In it, old wives’ tales, nursery rhymes, and fairy stories from around the world hide truths and the access to real power. Herbs and chants and blood can both heal and kill, depending on the will and knowledge of the wielder. There are ancient, magical enemies to be overcome, and the right to vote to be won.