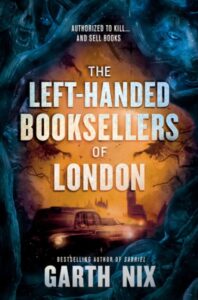 I have been a fan of Australian writer Garth Nix since reading one of his first books, Sabriel, in somewhere around 1996. When my son was growing up, Nix’s Seventh Tower series was one of the most readable and interesting fantasy series for boys. I was less taken with his recent book, Angel Mage, which seems to be written, I think, to appeal to readers looking for weighty epic fantasy populated by intricately-developed characters, something I don’t seem to have the concentration for at the moment. But as a bookseller, I couldn’t resist a book called The Left-Handed Booksellers of London, particularly with the added cover copy, “Authorized to kill . . . and sell books.”

Like Ben Aaronovich’s Rivers of London series (also highly recommended), the novel takes place in an alternate London where all sorts of magic and magical beings are real, and enough of a presence that police involvement is sometimes necessary. Aaronovich’s protagonists work for a police department that deals with magical “weird bollocks” in such a mundane way that the fact that the police actually investigate crimes seems almost as fantastical as the magical crimes they solve. Nix’s booksellers are an independent, ancient, and fearsome force of magic users who monitor magic use. The left-handed booksellers do the magical combat; the right-handed ones do the research. Both kinds are fully equipped to order new books from Penguin Paperbacks, though only the really experienced ones buy and sell rare used books.

The book is fast-paced and fun, with a good balance between action and character development. The main protagonist, 18-year-old Susan, is the obligatory woman who finds out that she’s not nearly as mundane as she’d thought. But I really liked the young left-handed bookseller, Merlin, whose irrepressible humor and cross-dressing wardrobe is matched by his skill with a magic sword. There is some hint of romance between them, but it never becomes explicit. There is also a charming, though sometimes not-so-nice, cast of booksellers both young and old, and I very much enjoyed watching the word “bookseller” become ever more ominous as the reader discovers just how powerful they are. If only . . .