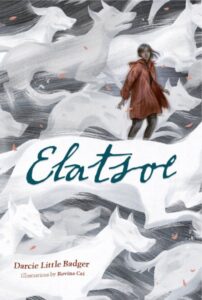 The world Elatsoe, as we find out on page 180 of the book, is pronounced “Eh-lat-so-ay,” and is the Lipan Apache word for hummingbird. It is also the full name of Ellie, the title character, who was named after her famous and powerful Six-Great grandmother, because her mother dreamed of a hummingbird with black feathers that glittered like photographs of galaxies. Ellie has inherited her family’s ability to raise the ghosts of dead animals, and is accompanied always by the ghost of her dog, Kirby. They have been together for seventeen years, though Kirby has been dead for five of them.

The novel takes place in an alternate Texas where many magical traditions, including those of the Native Lipan Apache, survive. There is a young vampire studying chemistry at the local college and descendants of Oberon who can travel by fairy ring (if they purchase a ticket), all living side-by-side with cell phones and cars. This is a world where disrupting your class by showing off your ghost dog is punishable only by minor embarrassment and brief suspension. It is also a world where murder can be accomplished and hidden by magical means, particularly if the magician is very wealthy comes from a more respectable magical culture.

The author is a member of the Lipan Apache Tribe of Texas and weaves Native legends into the story. This is her first novel, and the writing is not always expert, with some clunky prose and poorly-chosen phrases, but it improves throughout. I cannot judge the accuracy of the Native legends, nor of the authenticity of Darcie Little Badger’s voice, but I enjoyed Ellie’s fresh perspective on magic.

Though I liked Ellie and her dog, I found the book’s attitude toward adults to be its most refreshing and unique contribution. So often in fantasy books aimed at young adults, the older adults are either dead or incompetent, in order to get them out of the way so that the kids can have adventures. In Ellie’s case, she is the person who receives knowledge about a murder and no one doubts her need to solve it. She is aided in her quest both by the stories passed down by generations of Native women and by her actual parents who support her in her magical adventures without in any way diminishing her agency. In the hundreds of fantasy novels I have read over the years, this may be the first time I’ve seen a mother solemnly approve of her daughter’s actions and acknowledge the necessity of the risks she had to take in order to quell an ancient evil.