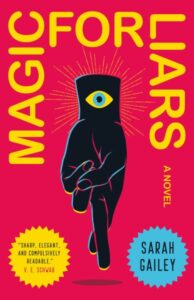 Magic for Liars by Sarah Gailey

a review by Lisa Freitag

Magic for Liars takes place in a world where magic is something you are, or are not; part of a person’s identity rather than something you can or can’t do. Unlike Gailey’s earlier magic novel, When We Were Magic, which begins with a girl who has just accidentally exploded a boy’s penis with magic, this one is not marketed for teens. It tracks high school identity formation and angst into middle age with a forty-something, magicless detective who must investigate a magical death at the privileged high school where her twin, magic sister teaches.

Gailey gifts her first-person narrator, Ivy Gamble, with a keen understanding of the way identities formed (or lies told) in high school translate into lifelong biases or barely-healed emotional wounds. As a detective, Ivy is almost magically observant, and describes her world in beautiful prose. The books in the Theoretical Magic section of the library where a death has just occurred are heard “murmuring to each other like a scandalized congregation of origami Presbyterians.” The books cease their whispering only after Ivy reveals the truths behind the death.

Ivy is at once wise and damaged, a properly cocky noir private detective who doesn’t really believe she is competent. She does, however, believe her own lie that she doesn’t resent her sister for being magic. At the high school, she weaves her own net of lies around students and faculty as she attempts to unravel the lies that led to the magical death. And, of course, she must face her past high school self and her relationship with her privileged sister in order to solve the mystery she’s been given.