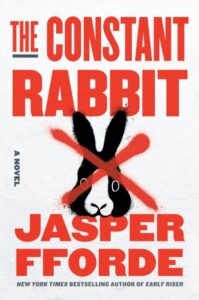 From the pen of Jasper Fforde, author of the best-selling “Thursday Next” series, comes another novel set in a world that is very familiar, but . . . well, not quite right. Fforde never attempts to explain the Spontaneous Anthropomorphizing Event that took place fifty-five years before the story begins, though some of his characters speculate that it might have been an Act of Satire. The result of the Event is the addition of 1.2 million very intelligent, humanlike Rabbits to a place that looks a bit like modern Wales.

The world has adapted to the Rabbits pretty much as you might expect. The government has built a number of large Rabbit Warrens and established agencies with long, obfuscating names like the Ministry of Rabbit Affairs. There is a Rabbit language (which uses only the letters N, I, R, H, U, and F), research into Rabbit culture, and a wealth of Rabbit translations of great literature and plays. And, of course, there are the comically realistic people who don’t really know any Rabbits, and so aren’t really aware of their level of prejudice. Not to mention the members of organizations called things like TwoLegsGood, who actively hate Rabbits.

Our hero is a middle-aged guy who is one of the few people who can actually tell the Rabbits apart, so he has been forced to work for the Rabbit Compliance Taskforce as a Rabbit Identification Operative, tracing Rabbits suspected of breaking the law. His stable but not-very-happy life is interrupted when a family of Rabbits moves in next door. We all get a light-hearted lesson in how racism works as the inevitable clashes begin.

The Rabbits themselves are a peaceful people who love literature, gardening, a vegetarian diet, and the occasional carrot. They have a lot of relatives, though they do practice birth control. They believe in a democracy where everyone watches out for everyone else’s rights instead of their own.

And the Rabbits are, in fact, aware that the new government-built MegaWarren, into which their entire population will soon be moved “for their own good,” is not where they want to be. But they have lawyers, and activists, and a plan based on a prophecy and agreed upon by all of them. It won’t change anybody’s life very much, but it might break your heart just a little bit as you laugh out loud at the silliness.