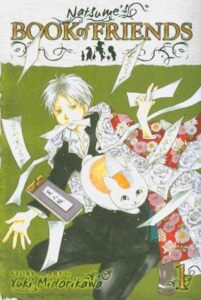 Japanese comics, called manga, provide a fascinating glimpse of another culture, along with some wonderful new comic art styles. These two very different manga were first published in Japan for kids in middle school. They might be challenging to young American readers because they are printed “backwards,” as they are in Japan. The books are read from back to front, and the pages from right to left. The stories might also be challenging, for adults as well as children, but their message of friendship and acceptance are important and universal.

Natsume’s Book of Friends by Yuki Midorikawa is about a teenage orphan boy who has been passed from home to home because he can see things which no one else can see. They are called yokai, and are a sort of benign supernatural being that has no parallel here. No one in Japan believes they exist either. Natsume is afraid of them until learns that his deceased grandmother could see them too, and she has left him a book of yokai names she called the “Book of Friends.”

At the beginning of the series, Natsume has just been sent to a new family and a new high school. He has learned to keep his distance from human and yokai alike, and is terribly lonely. But he meets a powerful yokai he calls Nyanko-Sensei (literally, cat teacher) who agrees, somewhat reluctantly and sarcastically, to protect him. He also meets his new adoptive parents and new classmates who, he slowly learns, might be willing to accept him.

The manga was produced as a series of short stories published over many years. All together there are 23 volumes of stories, and new ones are still being written in Japan. As they progress, Natsume becomes more comfortable with himself, and gathers a group of good friends, both human and yokai. But each individual volume contains one or two complete stories, which can be read in almost any order.