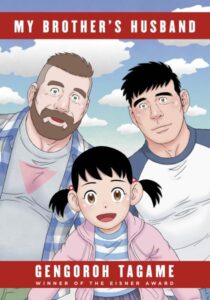 My Brother’s Husband by Gengoroh Tagame is a gentle story about the visit to Japan of a huge, gay Canadian named Mike. He is visiting Yaichi, the twin brother of his deceased husband, but the story is told mostly through the eyes of Kana, Yaichi’s young daughter. Kana is in third grade, and is exactly the right age and disposition to be able to innocently ask questions that reveal the rupture between Yaichi and his twin, and the hidden prejudice against homosexuality in Japan.

This may sound inappropriate for readers of Kana’s age, but it is not. In this book, marriage is only about love, not sex, and the message is that love between all people should be okay. There are some scenes of communal bathing, which we wouldn’t see here. This includes a trip where Kana’s whole family takes Mike to a traditional hot spring (onsen) in the mountains. After visiting the public baths, they travel to an aerial tramway from which they can view Mt. Fuji. They then, unrealistically, take a pirate ship back to the hot spring. My little family did the same trip when we were in Japan. Twice. Like Mike, we were the only non-Japanese people in the baths.

My Brother’s Husband is a complete graphic novel available in a two-volume set or a large, single-volume edition. It is a beautiful story about what makes up a family, learning to live with past regrets, and grieving for someone you should have spent more time with. But it is also about a young girl making a new friend from Canada, and teaching the adults in her life just how important that is.