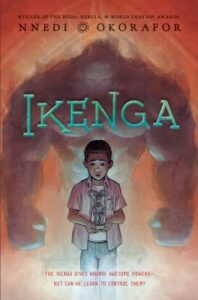 The book begins at the funeral of 12-year-old Nnamdi’s father, who had been the Chief of Police in the town of Kaleria, Nigeria when he was murdered. When the funeral is crashed by a gang of criminals and their “Chief of Chiefs,” who everyone believes killed his father, Nnandi vows to see them all punished. A year later, though, the murder is still unsolved and Nnandi’s sorrow is turning to shame and impotent rage.

This may not be the best time for Nnandi to receive from his father’s ghost a magical statue called an ikenga. But ikenga means “place of strength,” and he certainly needs that. At first is seems like a perfect solution, giving him Hulk-like super-strength fueled by his anger. But this may not be what either he or the town of Kaleria actually needs. He will have to decide whether to tend his father’s garden with his friend Chioma, or give vent to his anger and bring violence to the people he thinks are responsible for his father’s death.

This is a wonderful book for middle-schoolers, one of the few fantasies these days with a boy protagonist. Nnamdi is a quiet soul driven out of himself by anger that he clearly needs to learn to control. Chioma is one of the best girl supporting characters ever, using her wit, intelligence, compassion, and more than a little bit of courage to set Nnamdi on the right path.