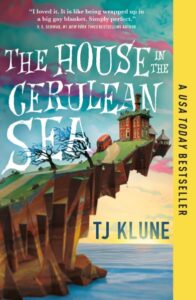 Linus Baker is a quiet, somewhat cowardly social worker, who takes his job with the Department in Charge of Magical Youth (DICOMY) very seriously. He investigates the orphanages where those troublesome magical youths are raised, and never really notices that keeping them safe and repressing them are very closely related. Arthur Parnassus is the director of one of those orphanages, perhaps the most dangerous one of all, since it houses Lucy, aka Lucifer the Anti-Christ, along with five other mysterious children. They meet when DICOMY sends Linus on a clearly-not-routine, month-long investigation of Arthur’s orphanage, located on a remote island, miles away from the last stop on the train line.

The House in the Cerulean Sea isn’t really a gay romance, though the cover quote describes it as “like being wrapped up in a big gay blanket.” There is attraction, yes, but it is not particularly physical or sexual. It is based on a middle-aged, stodgy compatibility and a growing realization that both men wish the magical children to be treated with gentleness and respect, no matter how odd they look or how dangerous their powers might seem. Really, the book is a love story between two men and six children (and the female sprite that owns the island). If that’s a big gay blanket, I wish I had one.

If I have any objections to the book, it is that it’s too comfortable, like a cozy mystery without the cat, and intolerance instead of murder. TJ Klune describes his book as providing “positive queer representation,” and it certainly does that. But it seems that Mr. Klune doesn’t have children. Everyone on the island has a secret and terribly abusive past, but it never seems to bother them. The children are too perfect, too adorable in their rare instances of misbehavior. But this is a fantasy. If you can believe that there are children with magical powers, you can probably accept that a large dose of love and patience will entirely erase the bitterness and isolation that usually accompanies an early history of abuse. Curl up and enjoy!

There are no upcoming events.