In the past few months, two of my favorite fantasy books, both long out of print, have been re-released in new editions. Both are from smaller presses, so are a little bit expensive, but still cheaper than the used original paperbacks, if you can find them. I read both of them again, and found that they are as beautifully written as I’d remembered. Both are still surprisingly relevant, a reminder that, though we have moved on to new crises and epidemics, the past was no less complicated. 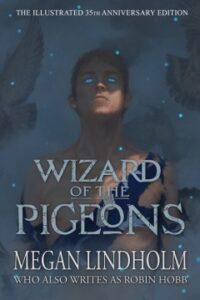 Wizard of the Pigeons by Megan Lindholm (before she became Robin Hobb) was published in 1985. This is one of the first, and still one of the best, urban fantasies. It is a love story to Seattle, told through the eyes of Wizard, a man not yet comfortable in his own power. The new 35th anniversary edition from Grim Oak Press ($30 hardcover) is illustrated with a darker palate than I’d like to see, though once Wizard’s Viet Nam War past arrives to haunt him, it is not inappropriate. As with many urban fantasies, the disenfranchised street people do, indeed, hold important magic necessary to maintain their city. But this Seattle is a place where the price of that magic might be living fully within something that looks very like madness. 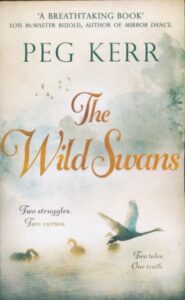 The Wild Swans by Peg Kerr was first released in 1999, and tells two loosely entwined stories, one from 1689 New England and one from 1981 New York City at the beginning of the AIDS epidemic. We at DreamHaven Books have signed copies of the new edition from Lume Press ($14.99 paperback). Eliza, in Puritan New England, weaves shirts from nettles for her swan-enchanted brothers, just as in the old fairy tale. Three hundred years later, Elias, a gay man disowned by his Puritan parents, finds a new family among the gay community of Manhattan and then must watch as his “brothers” are inexplicably taken away. In both stories, the real magic is redemption, and it is bought by sacrifice which leads to acceptance and a kind of sorrow that is not far from joy.

Both books finish with a cathartic sadness that nonetheless leads to hope. We have survived traumas before, and we will survive these new ones also.