The awfulness of 2020 is almost behind us, but we still need to get through another couple months of cold weather, short days, and quarantine. It’s a perfect time for reading in a comfy chair, preferably beside a fire or, possibly, just a space heater. Those of us who are voracious readers need something really long but not too taxing. For best results, we need a not-quite real place to hang out with imaginary people who we are pretty sure will survive their harrowing adventures. And their adventures need to be solidly in print, so that we can spend as much time with them as possible. 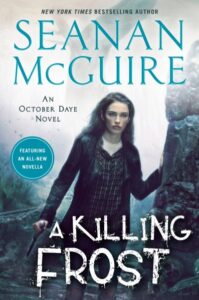 The “October Daye Series” by Seanan McGuire begins with Rosemary and Rue, and continues for fourteen more novels, the most recent of which is A Killing Frost. October (Toby) Daye is half human and half fae, so, of course, she is a private detective who investigates crimes involving any of the enormous variety of fae who populate the edges of San Francisco. She is a sarcastic and hilariously observant narrator, though she does go on a bit too long when describing the wonders and perils of faerie. Each book has a separate problem for Toby to solve, usually involving bloodshed, usually with her own blood. The books can be read individually but, if read in order, also provide the story of Toby’s search for reconciliation with her birth family and establishment of her own place to belong. 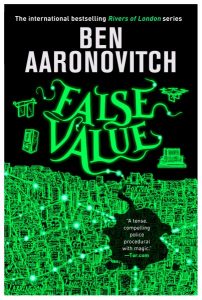 The “Rivers of London Series” by Ben Aaronovitch begins with Midnight Riot and continues for eight novels, the most recent of which is False Value. There are also two novellas, eight (mostly unavailable, sorry) graphic novels, and a short story collection called Tales from the Folly. Peter Grant is a half White, half Sierra Leone Krio Police Constable in London. He is assigned, reluctantly, to the sort-of-secret Metropolitan Police division, often called the Folly, that deals with magical crime in and around London. He is a sarcastic and hilariously observant narrator, though he does go on a bit too long about the wonders and atrocities of London architecture. Each book has a separate problem for Peter and his mentor and magic instructor, Detective Chief Inspector Nightingale, to solve, usually involving Peter using a spell he barely knows. The books can be read individually but, if read in order, also provide the story of Peter’s ongoing friendship with the many Goddesses of London’s rivers, the progress of Peter’s father’s washed-up jazz career, and a little more information about what, exactly, happened to Nightingale in Germany during World War Two.

Or, you could always reread Tolkien. Enjoy!